GoldenGate enables us to extract and replicate data across a variety of topologies as shown the diagram below as well as the exchange and manipulation of data at the transactional level between a variety of database platforms like Oracle, DB2, SQL Server, Ingres, MySQL etc.

It can support a number of different business requirements like: 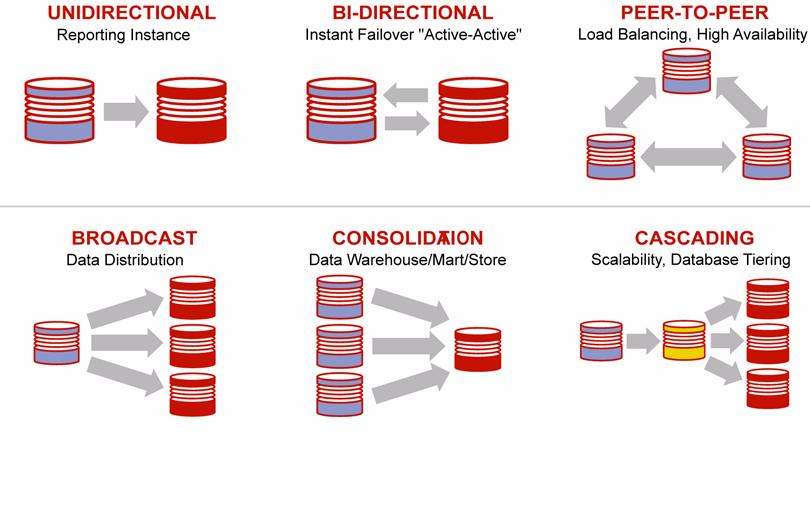 Let us know look at the differents components and processes that make up a typical GoldenGate configuration on Oracle.

The Manager process must be running on both the source as well as target systems before the Extract or Replicat process can be started and performs a number of functions including monitoring and starting other GoldenGate processes, managing the trail files and also reporting.

The Extract process runs on the source system and is the data caoture mechanism of GoldenGate. It can be configured both for initial loading of the source data as well as to synchronize the changed data on the source with the target. This can be configued to also propagate any DDL changes on those databases where DDL change support is available.

The Collector is a background process which runs on the target system and is started automatically by the Manager (Dynamic Collector) or it can be configured to stsrt manually (Static Collector). It receives extracted data changes that are sent via TCP/IP and writes then to the trail files from where they are processed by the Replicat process.

Trails are series of files that GoldenGate temporarily stores on disks and these files are written to and read from by the Extract and Replicat processes as the case may be. Depending on the configuration chosen, these trail files can exist on the source as well as on the target systems. If it exists on the local system, it will be known an Extract Trail or as an Remote Trail if it exists on the target system.

Data Pumps are secondary extract mechanisms which exist in the source configuration. This is optional component and if Data Pump is not used then Extract sends data via TCP/IP to the remote trail on the target. When Data Pump is configured, the the Primary Extract process will write to the Local Trail and then this trail is read by the Data Pump and data is sent over the network to Remote Trails on the target system.

In the absence of Data Pump, the data that the Extract process extracts resides in memory alone and there is no storage of this data anywhere on the source system. In case of network of target failures, there could be cases where the primary extract process can abort or abend. Data Pump can also be useful in those cases where we are doing complex filtering and transformation of data as well as when we are consolidating data from many sources to a central target.

When processing transactional data changes, the Extract process can obtain data directly from the database transaction logs (Oracle, DB2, SQL Server, MySQL etc) or from a GoldenGate Vendor Access Module (VAM) where the database vendor (for example Teradata) will provide the required components that will be used by Extract to extract the data changes.

To differentiate between the number of different Extract and Replicat groups which can potentially co-exist on a system, we can define processing groups. For instance, if we want to replicate different sets of data in parallel, we can create two Replicat groups.

Was this article helpful?

Gavin Soorma has not written a bio yet38